It was not as fun without Ursie to chat away with, although we had a new vollie Kerri she isn't crazy about dolphins… or anime... She really nice and kind, but a little slow working.

Every time the dolphins come in for a feed we have to record the weather, to see if it affects them. Some unlucky vollie counts the people on the beach – can be 200 for the first feed  - then there is the temperature, cloud cover, wind speed, wind direction, tide and tidal movement. Most of this can just be read off a digital barometer and copied onto a sheet which has information about the weather and times of the interactions on it. The tide someone has to check by going down to the boardwalk and looking at a measure stick on the side. Tidal movement is read off a sheet which has about four times on it, each time has a tidal number next to it. I’ll do a little example for you…

) She is so pretty! Hardly any marks or scars at all!

Today we went to Ocean Park, an aquarium place which main attraction is sharks. We joined a tour that had just started, (only about five other people on it) and saw the tiny turtles first. The man asked if anyone who would like to guess how long they lived. People said 60 – 100 years. It was actually only 10. Days!

I was surprised how small the place was as we moved around the five or six fish ‘tanks’ before reaching the big sharks. It was really good and informative; the marine biologists that work there really know their stuff. The shark feeding was great to watch and we learnt a lot. Afterwards Kim and I had a drink and cake on their amazing cafe area looking over the beach and sea. I want a house with a view like that! (First photo, shark feeding. Second photo, drinking and watching the sea.) 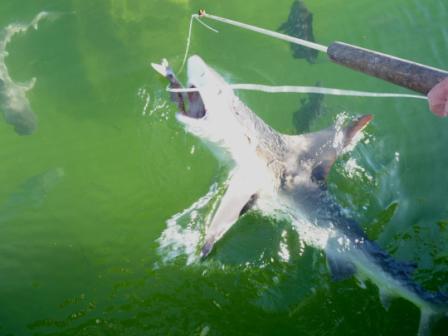 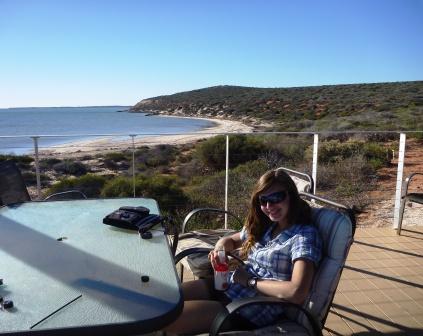 On the way back we visited an old sheep shearing place which also had a big natural hot tub (like a hot spring) which we will have to come back to! When we got back I went straight to the beach to get some photos of the sunset - and saw some dolphins too! I ran like a crazy person down the beach to get a photo of the dolphins in the sunset. (Photo below.) 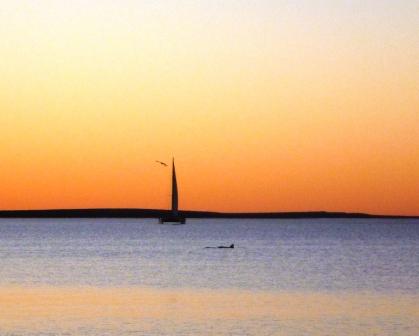 I blogged and e-mailed Ursie, then went to bed.

Reply Lesley
5:45 PM on August 4, 2010
We're interested in everything - even the tides!
I thought turtles lived for a long time - but perhaps that's tortoises?!