Seeming as I have ran out of jobs that I do while volunteering to tell you, I shall tell you about the dolphins of Monkey Mia! Well, there are over 1,000 dolphins here so I'll only tell you about the ones we feed. We only have five feeding dolphins. They are all related to the dolphins who began the whole feeding thing they want to keep it all in the family tree.

Shock is Surprise's calf, although not quite a calf anymore, and has a calf herself named Startle. She is so sweet, quite shy too, staying out a bit deeper and making the person with the fish go to her. You hardly ever see Shock without her calf.

Surprise is sooo pregnant, due September, and has had five calves already. She is one of the oldest dolphins with lots of speckles on her belly.

Piccolo is Puck's calf, although again an older one, and is very playful, always sitting there tasting the fish in her mouth and making it flop around a bit before actually eating it. Piccolo is normally most people's favourite, I think because she is so playful and child-like even though she has two calves of her own, the youngest one named Flute.

Puck is cute, like she's watching you the whole time and is there to see you not only get the fish. Puck has had eight calves but only four survived over a year, one dying after six weeks another after six days!

Nicky is just plain greedy, only after the fish! Her mother was Holey Fin who is quite famous for being one of the first feeding dolphins at Monkey Mia but was killed by a sting ray. Nicky has also had eight calves but six have died she's not actually a very good mother, more interested in fish then her calves. I like Nicky even though most people see her as a pig and naughty, maybe that's why I like her. Sorry about rambling on about the dolphins I could do that for a long time!

After work today we went out on a kayak with our lunch the kayak man giving it to us for free. The wind had mostly gone, it's been quite windy lately and the trailer has been rocking with it in the night! I saw a turtle head pop up in front of us but Kimmy only saw the splash when it went under. Apart from that we didn't see any other life in the sea before lunch; nevertheless we could hear the dolphins so knew they were around.

We pulled up on the beach to have lunch, and for a moment I thought the sand was moving somehow, but it was loads of really tiny hermit crabs! They were all over the place, you had to be careful where to step. (Below, me just before lunch.) 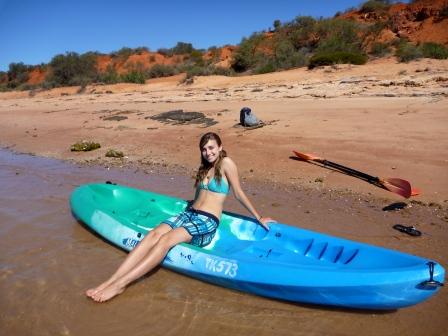 When we were about to go off again and I was dragging the kayak, and Kim, along to a deeper bit before I got in, I spotted two shovelhead sharks! They were about half a metre each, I didn't get any photos, just a blurry video of the sea. There were also loads of clams everywhere, big to small.

My arms had turned a bit white by the time we were back (after rescuing my flip flops from floating away) as the sea here is very salty and it's so hot the water evaporates really quickly.

We were both tired from the kayak so had a hot tub, shower, dinner, then Kim went to bed as I blogged and e-mailed Ursie first.

Reply Nan and Gramps
7:05 AM on August 6, 2010
Just think Jen you will be one of those brilliant qualified marine biologists in the not too distant future. Love Nan and Gramps xx