Not much news from volunteering, still having a really great time and learning lots from the rangers and just dolphins in general – no I didn’t already know everything about them. I love how each dolphin has their own personality and I've got to know them all well. I talked to the ranger who gave us the introduction to ask about staying longer, I can’t believe tomorrow will be my last day! I simply refuse. She said that Friday was full but I could work Saturday, yay! She made fun of how professional I was on the radio, saying I was like an airhostess, however, people say that it’s a good sign when Aussie’s make fun of you; it means they like you.

After work, which finished about 10:30am, we went to pack up the camper and awning. While in the sun. Which was very hot. Not fun. The awning decided to be evil and be a pain, but we finally got it under control. When we were done we thought we deserved an ice-cream (we’ve had one every day for the past four days and the man in the bar knows me now) and a little boat trip before we left to go to Denham (Monkey Mia couldn’t fit us in for all the days accommodation).

The kayak guy was pleased to see us again and we took out a small motored glass boat, where you laid on your front. It was actually really fun! I drove most of the time and we saw star fish, other fish, and I even spotted a shovelhead shark! Which is technically a ray… 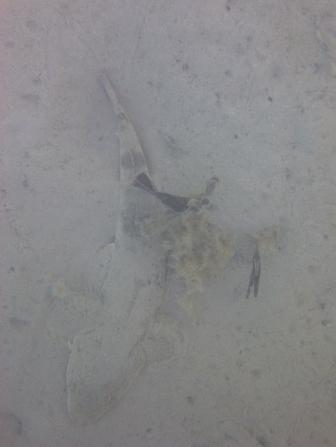 We were on the boat for just over an hour, then came back in, showered and left for Denham. It was just less than half an hour’s drive, so nothing at all really! We are staying in a campsite called Shark Bay Campsite, funnily enough, and we are in a cabin instead of the trailer. Paddy flies out from Melbourne very soon and we thought after the flight it would be nice to be in a bed. I had four beds to choose from! The place was very strange… with random walls and interior windows… But after dinner and talking to dad on skype we headed back to Monkey Mia for a research seminar on Dolphin Politics!

The seminar started at 7:30pm and lasted about an hour. It covered various things about dolphins, although was mainly about their social groups and male behaviour. It was really interesting and I learnt loads about dolphins and also the researchers that go out and study them, like how they collect tissue samples from the dolphins even though they are wild. I stayed afterwards to ask them a few questions and try and see if I could get a ride on the research boat to see what they did, but with no luck. He said they already had too many people and too much equipment. I guess I have to leave some things to do next time... He did give me a website that has different projects around the world so I'll definiatly have a look on that and see what I can get involved in!