Kim came to work with me today and had to help out with the first feed because we had all the five feeding dolphins in and only four people to feed – two vollies and two rangers. Then she went off to the airport to pick up Paddy!Yay! We had two naughty dolphins try and get an extra feed, Nicky (of course) and Piccolo, which was odd. I got some nice photos though and they didn’t stay for more than half an hour. (Piccolo and her calf Flute below.) 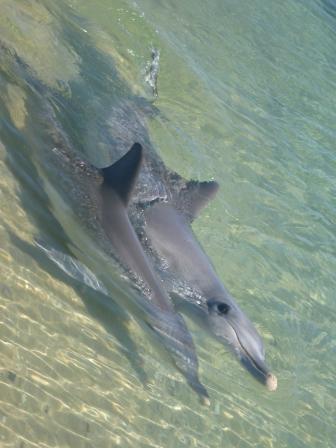 I had a nice scone in the cafe after work and looked around the shops, then lay on the beach or a bit – fell asleep by accident. Next thing I realised it was time to meet the others. I bought an ice cream and Kim found me on the beach. We had picnic lunch near the bar; it was great to see Paddy again.

Then we went for a walk to the other side of the beach we hadn’t really gone to. It was so shallow in places that there were lots of mini islands not far out that you could just walk to. It was beautiful! The sea was so calm and blue.

Paddy seemed to switch into holiday mood well… here’s a photo of him anda clump of coral he found... 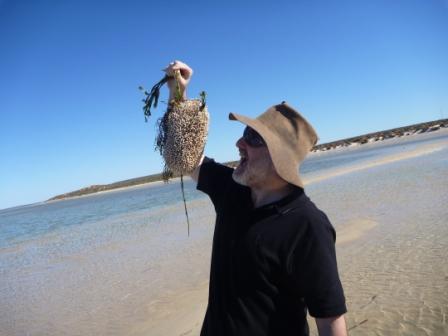 I took lots of photos; I’ve taken over 1,700 altogether so far! Then we went back to the cabin to have an early dinner, dress a bit warmer, and go out for an aboriginal tour!

We met at 6:30pm, I was expecting about five people… but we had at least fifteen because a coach load of them arrived today!

It was a really good evening; we learnt some aboriginal language and stories, their traditions and respect for the land. Everyone had a go at trying to make a sound out of a huge sea shell which had been made into a didgeridoo, I was very close! The aboriginal man drew animal prints and a map of the land in the sand, telling us about each area. Then he played us some songs which were inspired by different animals – we had to guess which animal. While he cooked some fish on the bonfire we could ask him any questions. I asked whether whales were a sacred or special animal to them at all. He said that whales were very sacred and dolphins were special to, they eat neither of them and in their language call dolphins friends – as well as smelly face. I was the only one who didn’t eat fish, although everyone said it was really good. (Photo below, fish cooking by the fire.) 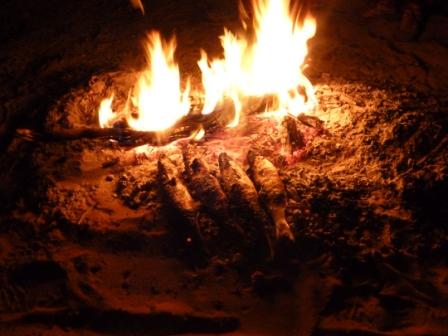 On the way back he showed us an emu shadow in the sky… but I couldn’t see it! Everyone around me was going, ‘oh yeah!’ ‘Wow, look at that!’ Very annoying. All in all a great night!