My last day! Nooo, I don’t want to go! Kim and Pad came with me and hung around till the first feed, which was slightly later than normal. Kerri had told me she had extended her volunteering too, but she never showed which was odd... but didn't make that much difference.

Shock came in! I was so happy she had come to say goodbye to me! Paddy andKim took some photos of me, and Paddy got picked to feed Shock… how unexpected…

I was going to choose a nice girl who had been standing near the front waiting, but when I looked at her she started waving at me! How annoying. It’s frustrating when people wave at you, especially when you actually were going to pick them. I had a limited choice because a huge group of people were standing nearly knee deep in front of me! I couldn’t choose anyone with their feet in the water… so that cut all of those people out. I don’t think many of them understood English well and later I learned one of them actually patted Puck! NO TOUCHING! It’s not that hard! Then Pad and Kim went off back to the cabin. There was a second and third feed, everyone but Nicky came to see me. Then she came in just after the last feed! Awww, I felt sorry for her. Then some other dolphins turned up in the shallows waiting for a ‘4th feed’ they knew wasn’t going to come. Soon we had eight dolphins waiting! The public were being hard to deal with today, not listening to the rangers and trying to get close to the water. (Photo below, the eight dolphins in the shallows waiting for fish… or coming to say goodbye to me… either one. Yes I know there is a post in the way, I would edit it out but Kim’s laptop doesn’t have photoshop.) 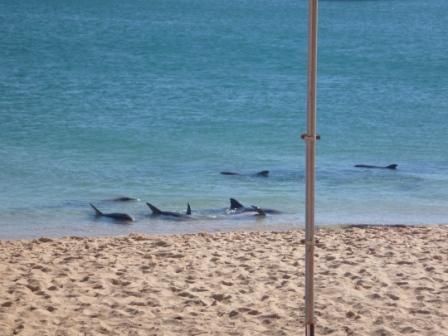 After the dolphins had gone I cleaned everything and got ready slowly, not wanting to go. I got a letter/report thing about how I had been as a worker– I’ll scan it in to put on here when I get home. They had a poster of a turtle where volunteers signed their names (the dolphin one was full) so I signed it next to Ursie and the dolphin she drew and then drew Surprise’s dorsal fin, followed by Shock’s then Startles. A little family tree!Then I wrote a little message on the white board telling them I would be back, said bye to the other two vollies and left to get a scone from the cafe again. (I worked out from my time sheet that I had worked about 40 hours.)

We all met up again at half twelve to have a bit of lunch before going to the wildlife cruise!

It was really good – even though I met a couple who were very disappointed. We saw dugongs! Mothers and calves and a couple of single ones! They are more graceful than I thought and also a different colour, they are almost ginger. It was surprisingly hard to get photos of them because they poke only their nose out of the water for less than a second, plus I was using Kim’s camera because mine was out of battery from my last day volunteering and hers is a bit slow. I did get one though!

Then we saw a turtle ('a dark shape in the water' said the couple that were not impressed... there's just no pleasing some people) and later a pod of about seven male dolphins! They were all in line and came up in unison… but Kim had the camera and didn’t get them. Still it was so cool! For the return journey I talked to a boy called Mark who was really interesting, having travelled to loads of places and done lots of things. Lord Of The Rings came up in conversation, and you know that river at the end of the last film with the statues each side? (Or you will if you're my mum, dad, brother or Rachael anyway.) Well he’s body boarded down it! So jealous! I met his sister Helen too, but then didn’t see them again after getting off the boat – I went straight to the hot tub.

For my last night we had chicken casserole by the beach in the sunset. A couple of dolphins in the shallows and that was the last thing I saw, which was sweet. Then Paddy and Kim packed the van while I had a go on the swing before we took some photos of me by the sign. I said goodbye and was driven away...

I don't think I did any blogging... you can see why I got behind! Although I talked to Rachael on skype before she left for France which was really good. Then I text Brad and went to sleep.